It’s been a week and I’m still here. The startup world hasn’t scared me away just yet. In fact, my job isn’t much different from any other job I’ve held. But there are a few things that will take some getting used to.

I’ll continue to post as I have more to share with you. How does this compare to your work experience? If you’ve worked in a startup, or started a company, I want to hear from you. Leave a comment below.

Despite the pessimistic outlook I expressed in a post a few weeks ago, some opportunities have come my way. I received two job offers last week, which left me with a difficult decision. Accept the safe, steady job with a traditional company, or join the Silicon Valley startup that offers potential for fast advancement, but at much higher risk?

I had less than 48 hours to decide. The decision became easy once I weighed the starting pay against potential for upward mobility. I chose the startup. The traditional company was difficult to turn down because it was a safe bet and an opportunity to learn a new industry, but I couldn’t resist the excitement of joining a great company in its infancy.

Today is my first day as an employee of Keen Systems, a company that is bringing small printing companies into the 21st Century. There are several products in Alpha and Beta stages, so I can’t share much, but our Web-2-Print platform represents an amazing opportunity for small companies in the print industry to take their business online and land new customers in one of the world’s fastest growing sectors.

I’ll share more about my experiences working for a startup as I learn what I’m allowed to tell you. More to come.

This view, from the kitchen of my parents’ home, is helping me deal with the sadness I’m feeling over no longer in Korea. That’s Angel Island out in the distance. The hills covered in houses is Sausalito. The view changes every morning thanks to the heavy fog and bright sun rising over the bay.

It has only been about 48 hours since my last post, and I’m already way behind.  There are so many things I want to share, so my plan is to do so in an organized fashion.  Each of the next few posts will be about a specific event or element of my trip.  The first is my flight from San Francisco to Seoul.

I have never been in such a giant plane.  It seems impossible that something so big and heavy can fly half way around the world without stopping.  I tried to take picture that demonstrated the size of the cabin, but it was impossible as there are 10 (yes 10) galleys.  The best I could do was to stand at the back of the plan and snap a shot of the portion of the cabin in which I sat.

The crew was larger than I expected.  There must have been two dozen flight attendants spread throughout the cabin.  They took turns sleeping (in a crew cabin upstairs at the rear of the plane) and seemed to always be refreshing drinks and serving food.  I seldom saw an empty glass.  The only thing better than the service was the hotness of the crew.  Several of the women were exceptionally attractive.  I can’t believe I didn’t get caught staring. 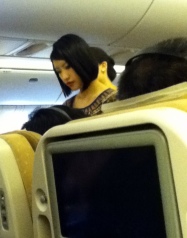 The flight did not seem to take as long as I expected.  The seemingly endless supply of movies, shows, and games available on the seat-back screen was helpful.  We were allowed to congregate in the rear of the plane near one of the crew galleys, which helped to break the monotony.  I met and chatted with a few other EPIK teachers that way.  At one point, a flight attendant came up to us and said, “you’re not allowed to congregate in the rear of the plane….without wine.”  He returned shortly with a bottle of Cabernet and a handful of glasses.

Thirteen hours after leaving San Francisco, we touched down at Incheon Airport, which was amazing.  It was clean and simple, but not institutional.  I am confident that you could eat off of any surface in the building.  There were moving walkways everywhere.  I traveled at least a quarter mile between the gate and customs, but I doubt that I walked more than 100 yards.   It was all foreign and a bit intimidating, but an unexpected sight helped to settle my nerves. 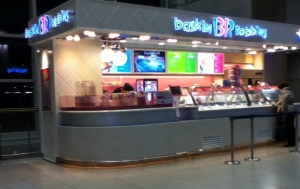 The rest of the night was interesting, as was the following day, but I’ll save that for another post.  I look forward to telling you all about it.

Note: This post was written previously by my younger sister, Claire.  She wrote it over the course of the three days during which I stayed with her prior to leaving for Seoul.  This is my first chance to post it.  I’ll probably spend the rest of this week catching you up on what has happened so far.  I can’t wait to tell you about everything, but that will have to come a little later.  Enjoy!

The big day is almost here. Taft is going to board the long anticipated flight to Korea tomorrow. Because we have spent the last couple of nights out (with some fun stories), I thought that I would give Taft a break and write a guest post.

We started Thursday night at happy hour with a few of my work friends.  I was saying goodbye to them because I am also leaving a job and moving, but only about ten miles away.  Taft got to meet a few of the people I worked with, but we were not done with our night of drinking yet.  We wandered back to North Beach, my neighborhood, and decided to stop in wherever looked appealing.  Vesuvio was the winner. One of the older SF bars, Vesuvio was an iconic artist/hippie hangout for years.  The bartender (Dave) was great. Chatty, dry humor, an SF native. He wrote down a korean dish for Taft to try while his was there.  I was in and out of conversations between them, but did hear Dave’s idea for what he would call an asian restaurant in order to get more asian business – “Super Infinity Kitty Cat Lunchtime.”  Awesome. 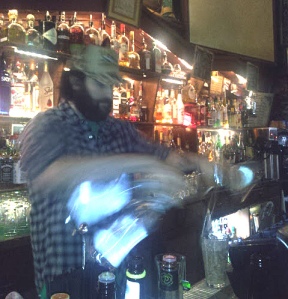 Taft spotted a local guy in Vesuvio that he wanted to take a picture with. Patrick is a north beacher that I have seen around for years but had never met. Top hat, long gray hair, all black attire.  He spoke with a voice box (the kind you have to put up to your throat and push a button), and he was very nice and very willing to take a few pictures with us.  We offered to buy him a beer, and woke up the next morning realizing that we had never done so. Oops.

Patrick, Taft, and me

After a few drinks at Vesuvio, we ventured north on Columbus to Grant street.  Tope is a new bar that a friend of mine opened recently, and it is my go-to bar.  The bartender (Casey) reminds me of Taft, and I always seem to end up there.  Casey sometimes brings in his Great Pyrenees mix and lets her lay around the bar. 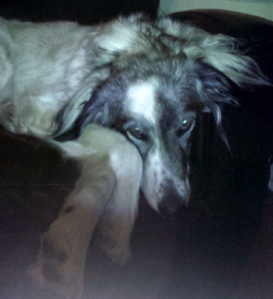 We hung out with Casey, had some more beer, and pet a giant dog for another hour or so.  Casey is a sailor and offered to take us sailing with him the next day.  Unfortunately, we were flakes.  Waking up with the hangovers that we did would not have been fun on a boat.

This post is being done over about twelve hours.  I just got back from taking Taft to the airport.  I wasn’t so affected by the whole situation until I took this picture. 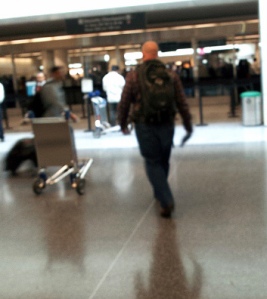 This was Taft walking away. To go through security. To go to Korea. Woah.

Hit me like a ton of bricks.  Not so much sad as it was the shock of realizing he was going across the world for a year.  I am so excited to hear about his adventures abroad, and so glad I got to spend the last few days before his departure hanging out and catching up.  Taft – I know this will be quite an adventure, and I cant wait to hear about it all.  Miss you already and love you.  Safe travels!